It’s what’s inside that really counts

In our globalised, digitalised and highly commercialised world, there seems to be a view among many marketers that “perception will become reality” and that you can almost turn a sow’s ear into a silk purse if you dress it up nicely enough! And the wine industry is not immune to this approach. How often do we as wine consumers, reach for the more expensive heavy or funky bottle with the flashy label, rather than the plain looking cheaper cousin standing next to it? I know I am guilty of it. And despite having learned the hard way that a bit of razzle-dazzle on the bottle doesn’t improve the quality of the wine inside it, I am a repeat offender. As my good friend Michael often says “sometimes it’s all hat and no cattle” and regrettably, that is often the case in wine retailing.

So to find a brand whose wines carry swanky, if not garish labels, but have a commensurate quality of juice inside the bottle, was as refreshing for my soul as it was for my taste buds!

The Tempus Two label was founded in 1997 in the New South Wales Hunter Valley by the McGuigans – a family whose connection to winemaking in the region extends over four generations back to 1869. Their vision was to create a “unique and distinctive range of wines from Australia’s premier wine growing regions” and there is no doubt that they’re doing a pretty good job with it.

Rather than pretend (as many wineries do) that their patch of vineyards in the Hunter Valley can produce exceptional fruit of multiple varieties, Tempus Two source or grow their grapes where the particular style does best. Their Hunter Valley sites focus on Chardonnay, Verdelho and Semillon while the Adelaide Hills provide Sauvignon Blanc and Pinot Gris. For the reds, the Coonawarra delivers the Merlot and Cabernet while the Barossa and Limestone Coast contribute Shiraz to the portfolio. I’m told that in fact, they have vineyards in some nine different mainland locations.

The team at Tempus Two will tell you that their philosophy is “to create a series of wines that taste as good as they look” and having taken a recent tour through some of the range, it seems that they are doing a “bang-up” job! 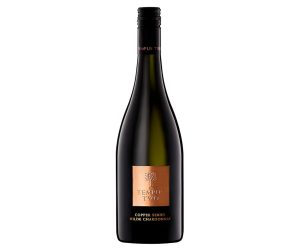 One of my favourites is the Tempus Two Wilde Chardonnay which sells at a sensible $25 to $30 price point. It is a blend of fruit from two premier Chardonnay regions, the Hunter Valley (where they have older vines) and the Adelaide Hills (where the plantings were more recent). It is a rich and luscious style that I suspect will only get better over the next few years. On the nose, there are hints of nectarine and honeydew melon while across the palate, layers of peach and lychees escape from the clutches of citric sentinels that restrain a mouth-filling creaminess from dominating in the middle. Extended lees contact and stirring through the vinification process has ensured a complexity and persistence through the finish that you would expect of a wine more than twice the price. A great match for ravioli in a creamy mushroom sauce!

It wasn’t just the Wilde Chardonnay that hit all the right notes. Right across the range, the Tempus Two experience wasn’t one of those “all icing, no cake” disappointments. It’s great to find wine labels where the skill of the winemaker matches that of the marketing and communications team!