In this 21st Century digital and commercialised world we live in, it’s the big end of town that seemingly holds the whip hand when it comes to promoting and selling wines in Australia. After all, when you consider that between Coles and Woolworths, they control (on some estimates) between 70 and 80 percent of the domestic market, can we realistically expect the smaller players to be able to receive any airtime? 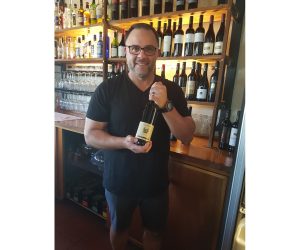 But against those odds, there are a group of Aussie battlers in the winemaking industry who pursue their passion and do their best to defy the odds and make a living.

Take Sam Scarpari. He is a restaurateur, retailer, vineyard manager and wine nut. By day, he is the Head of the Fine Wine Department of an outlet for one of the majors, but the rest of his life is consumed by his indulgence on viticulture, food and wine. A self-confessed addict to social media, Sam is a regular blogger, wine reviewer and industry commentator who believes that when it comes to winemaking, “less is more”. Simple, uncomplicated and uncontrived. That is the kind of bloke Sam is.

As 5:00pm rolls around, Sam changes his cap and transforms from wine consultant to Italian Restaurateur. His ristorante, bar and forno is found tucked away in North Street in the Victorian Town of Shepparton. The venue is described as “cosmopolitan in the country” and unsurprisingly, serves traditional Italian fare utilising local and seasonal produce. But it is the sideline enoteca which really floats the boat of Shepperton’s keenest vinophile.

It may be just a sideline for Sam, but under his private label, Seraphim Wines, Sam crafts a small range of pinot gris, chardonnay, cabernet sauvignon and shiraz wines using fruit sourced from a diverse range of regions. While the majority of the wines are destined for consumption at Bicaro’s, his Shepperton restaurant, they are also sold at very reasonable retail prices for takeaway or mail order clientele.

While I haven’t been treated to a wine flight through the Seraphim Cellar, I did recently manage a sneaky look at the 2014 Seraphim Heathcote Shiraz. Wow! Using fruit from the Chinaman’s Bend Vineyard in the goldfields region of Heathcote in Central Victoria, Sam has crafted a shiraz that stands true to the regional nuances and Cambrian soils that make Heathcote Shiraz so distinctive. There’s an inky blue and black berried intensity as the wine stands longingly in the glass. A couple of swirls, and hints of cloves, cedar wood and french oak appear and soon have your salivary glands engaged in a Pavlov’s Dog kind of way. Once in the lips, the Heathcote fruit cuts a blueberry, white pepper and blackcurrant swathe across the palate before soft tannins embrace the backend and caress a ripe, lingering and spicy finale.

Considering that you can buy the wine at only $20 a bottle from Bicaro’s online, the transport cost to make a carton arrive on your doorstep might just be the best investment you’ll make this year!

The little guys like Sam Scarpari and Seraphim Wines might struggle to match motors with industry behemoths when it comes to marketing and promotion. But when their wares are artisan crafted and fuelled by the wine maker’s zealous belief in minimalist nurturing of fruit from vineyard to bottle, you’d have to think that it’s a niche sector in a competitive industry where David just might be able to outfox and outplay Goliath.