Got to give it to the Yanks

Got to give it to the Yanks 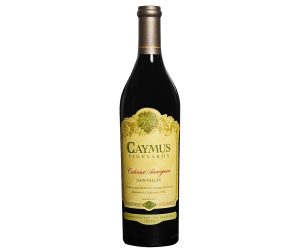 One winemaker has stubbornly been making only one variety since 1972, and to hell with the risk!

Any good professional adviser will tell you that it’s risk management 101 to spread your risk and have a backup plan just in case. “Have another string to your bow”, or perhaps ” add another arrow to your quiver!” and if things don’t turn out well with “Plan A’’, you’ll always have something else to fall back on. Or so they say. So it takes the brave (or the stupid) to put all their eggs in one basket and specialize to the point of becoming a “one trick pony”. And it’s perhaps for this reason that in the winemaking world, there’s a tendency on the part of vignerons to plant any number of different varietals, both red and white just to be able to be able to offer something to suit every set of taste buds.

So it was somewhat surprising to recently discover that an iconic American Cabernet, the Caymus, is made by a winemaker who produces nothing other than Cabernet on their 350-acre property in California’s Napa Valley. And if that was surprising, the fact that the Caymus winemaker, Chuck Wagner, makes only 3 different wines (and less in challenging years) from such a substantial land holding, is bordering on the astonishing!

My encounter with the Caymus brand was somewhat accidental. If not for my discussion with a Chinese born American sommelier recently, I might never have discovered the virtues of the Caymus cabernet. In the course of chatting about her likes and dislikes on a wine list, she insisted that the Caymus Cabernet was the best red wine she had ever tasted. And I’m sure that to an expert of her experience, that was quite an endorsement!

The current release of the Caymus Cabernet Sauvignon is the 2016 and it’s simply outstanding! It’s not like the styles of Australian producers as there is less tannin and more sweetness than most of the peppery Coonawarra or jammy Mc Laren Vale examples that grace our local shelves. I’m told that the Caymus remains the only wine to have ever twice been named Wine Spectator’s Wine of the Year ( with their 1984 and 1990 vintages) and has become a collectable for American enthusiasts.

Given that it’s not stocked locally, most of us in Australia won’t get an opportunity to enjoy the rich lush fruit that the Caymus offers up front. Or the cassis and ripe dark berries that serenade the mid-palate. Or the cacao tannins that softly announce their presence in the middle and unfurl on a long and lingering the conclusion. While there are some cigar box notes on the edges, I wouldn’t say that it’s a savoury style; nor would I suggest (despite what the winery claim) that it’s been bestowed with the muscular frame required to withstand decades laying on its side.

But the Caymus is seriously good and worthy of its lofty price tag ($90 to $100 USD in most places and more for the 1 litre bottle). But the didactic message in their success story is the myopic view of winemaker Chuck Wagner that if the vineyard is perfectly suited to cabernet, why bother to try and make other varietals? It might send shudders through the spines of the highly paid business consultants who insist that risk spreading is a fundamental strategy for enterprise security, but it’s worked for Chuck. And if you ever find his wares on your travels, be sure to grab a bottle for me too!

To hear what Travis Schultz has to say about the Caymus 2016 Cabernet Sauvignon click here.