Steeped in tradition and blessed with diverse terroir, the French wine industry enjoys an enviable position atop the rankings of the world’s wine producing regions. As one of the top three producers of table wine by volume (Italy and Spain produce similar volumes each year, depending on vintage conditions), France is also blessed with a unique wine tourism offering thanks to its history, architecture, unique landscapes and viticultural reputation. And with such a significant strategic advantage, it’s perhaps a little surprising that it has taken so long for commercialisation of the industry to result in a genuine focus on the wine tourist, rather than the wine consumer; but I sense a whiff of change in the Mistral breezes!

In France, the well established regions recognized by the Appellation Controlee (such as Bordeaux, Burgundy, Champagne, Alsace etc) rely on the quality of their brand and reputations to attract visitors, other relatively “new” districts are creating a modern cellar door experience and embracing digital marketing in order to lure the modern oenological tourist. 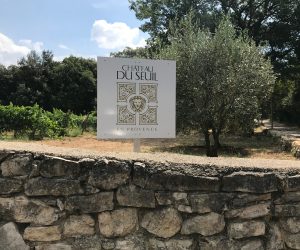 Located within the Coteaux d’Aix-en-Provence designation on the Puyricard plateau Chateau Du Seuil is a vineyard and winery that boasts centuries of history, but is investing in a 21st century built environment to complement its Provençale antiquity. The original Chateau was largely constructed in the 17th Century, when structures built in the 13th and 16th centuries were combined and expanded, to create a summer residence for members of the local Aix parliament. The towers and central façade are as impressive as the 16th century garden (and its 200-year-old cedar trees) that the mansion overlooks. The Du Seuil vineyard itself sits at an altitude of between 350 and 450 metres and hosts vines that produce Grenache, Cabernet Sauvignon, Syrah (Shiraz), Sauvignon Blanc, Ugni Blanc (Trebbiano) and Rolle (Vermentino).

And as impressive as the old world structures may be, it was the sleek modern cellar door where we spent most of our time on a recent visit. The design is overtly focussed on meeting the needs of tourists, with a spacious cavern, lustrous fittings, shelves filled with their red, white and pink wares, and bilingual staff trained in the technical detail of both the growing and winemaking process. Our hosts, Marion and Anna were gracious, and knowledgeable of the Chateau Du Seuil history, though it took me a little by surprise to be told that we could only sample two of their wines, even though all six table wines were available to choose from. Can you imagine turning up to a Barossa Valley or Hunter Valley cellar door to be told that you were only allowed to have a 20ml sip of just two of the double-digit list of products? I can’t help but wonder how much more wine Marion and Anna could sell if they were permitted to grace guest’s tasting glasses with a tiny pour of all six of the vins in their armoury! 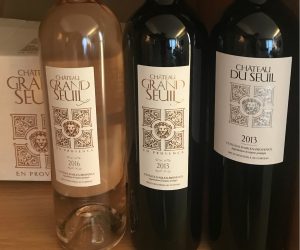 By French standards, the Du Seuil wines were inexpensive and the Chateau Grand Seuil Rose` 2015 (at AUD $25) was one of the most memorable blush wines I imbibed during my time in Europe. It’s a blend of 80% Cinsault, Grenache (15%) and Syrah and is typically floral, delicate and crisp, with a watermelon and honey-dew undercurrent.

The wine tourism industry in France may not yet have reached the mature and lofty notoriety of its noble Chateaus and grand cru wines, but the precocious new generation of vignerons, winemakers and vintners seem to be recalibrating their perception of the value of wine industry tourism. Could another French Renaissance soon be underway?