My slightly offbeat and spiritual sister would say it is fate or destiny, but some of the best viticultural discoveries I’ve encountered were completely unintended and happened upon purely by chance. Big Sis would take a fatalistic view and claim it was karma at play but I personally prefer to see these happenings as chance, accident or simply coincidence. But whatever it is, my detour last year to the Lake Garda Region on North Eastern Italy has changed my perspective on Veronese wines.

It was late in the day and courtesy of Qantas’ decision not to fly into the more convenience Venice Airport, I was having to drive from Milan towards the Dolomites as I planned to ride their famous Mountain passes around Cortina for a few days. But after a layover in Dubai and 32 hours of travel, I decided I’d have to take the next exit off the Autostrada A4 and find the first town with a vacant motel room. And there it was! Lake Garda exit, 2kms on the right.

And what a spectacular part of the world to become marooned in for a day or two. Coastal cliffs, alpine mountains, ancient hamlets and breathtaking aqua marina lake-scapes. But best of all, rolling green vineyards on every visible hillside! So what could I do to kill a day or two?

I’d always assumed that due to the coolish climate in the region, that North Eastern Italy only produced good white wines like Pinot Grigio and Prosecco (which is now known as Glera). But to my surprise, the locals were more than happy to fill my glass with some outstanding reds from the region like Carmenere, Garganega and Corvina. My favourite Italian style of red has always been Amarone della Valpolicella which is a dry style of red that resembles a Barossa Shiraz on steroids!

It is usually a blend of Corvina, Rondinella and Molinara grapes. Typically, the fruit is dried for months in a loft until they lose around 40% of their moisture. The raisinesque fruit is then crushed and the low yield and hard labour makes it an expensive wine to buy.

Locally, we would rarely see a good example of Amarone for less than a $100 a bottle. Its little brother Ripasso however, is cheaper, but not the same experience. 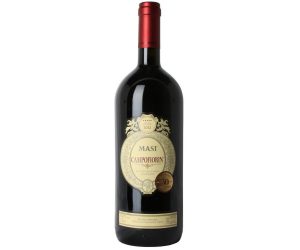 Recently, I was scouring the shelves of one of the majors and found an imported Ripasso at only $38 a bottle. The Betty Bargain Hunter in me couldn’t resist! Masi Campofiorin Ripasso 2012 doesn’t have the intensity and ripeness of fruit of its big brother, but does use a small amount of semi-dried grapes and reuses the lees from Amarone production to give it richness and greater palate weight.

In the glass, the Campofiorin is ruby red and releases delicious aromas of stewed plums on the nose. Once on the palate, the red fruit characters announce their presence and leave a trail of bitter cherries and sweet spices through the finale, with perhaps just a small hint of herbaceousness.

But it’s the texture and velvety tannins make it such a value proposition for a Veneto import. If the price of Amarone is a bridge too far, the Masi Campofiorin is a respectable compromise.

And to think, if it weren’t for that fateful detour, I may have remained ignorant to this day, to the grace and qualities of the Veronese Rosso Vino.