Northern Tasmania is a region accustomed to regeneration. Not just in its seasonal scheduled back burning to reduce fuel for forest fires, but in its viticultural endeavours and oenological exploits. While grapes were first planted in the north of the state in the 1800’s, it wasn’t until the industry was re-examined in the 1950’s and 1960’s that the re-birth of the local wine industry took a hold.

These days, despite accounting for only about 1% of national grape production, the district punches above its weight in the trophy stakes. It’s a region that knows how to make an entrance – like Ninth Island; a local winery which launched its Chardonnay at the International Wine Challenge in London in 1994 and walked away with a trophy for the best white wine in show! But it’s not just Piper’s Brook that highlights the terroir and ideal cool climate character of the region – think Heemskerk, Jansz and Tamar Ridge! Exceptional product that has garnered international acclaim.

Crisp, clean and fresh are the buzzwords at any local cellar door, and they are apt descriptors not just in the vineyard but through most of the smallest State of Australia. Tasmania is an island blessed with rare purity of air, environment and water source and the pristine conditions are perfectly suited to the production of cool climate aromatic whites and pinot noir. Few would argue the cool climate tag that is bestowed on the Tamar River district but add fertile soils, a touch of elevation and a lashing of gentle precipitation and the qualities of a Burgundian style region are plain for all to see.

My sister and her fiancée recently spent some time researching the local wineries on my behalf and later regaled us with stories of the best cellar doors they visited. And normally, I would treat any recommendation from my sister (who struggles to distinguish between a Chardonnay and a Shiraz) with a large grain of salt, but her fiancée, Chris, has demonstrated a remarkably well-developed palate, so his insistence as to the quality of various wineries’ wares, was good enough for me! And the most fervent praise from their week of swanning around the cellar doors near Launceston was reserved for the Swinging Gate Estate at Glendale Road, Sydmouth. 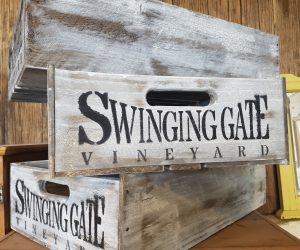 Proprietor Doug Cox purchased a run down and derelict Swinging Gate in 2014 and embarked on a program of rejuvenation of both the vines and the facilities. The machinery shed was transformed into a cellar door outlet and a day spa, while the 30-year-old vines have been nurtured, caressed and cajoled into the production of premium whites and pinot noir. I’m not sure if it was the intoxication of the affable host, the tour and tasting of the barrel room or just the cool climate wines on offer, but during my sister’s visit, the frequency of her text messages and photos was surpassed only by the rate at which the superlatives preceded each noun!

As you’d expect from a Tamar Valley producer, Pinot Gris, Sauvignon Blanc and Pinot Noir all feature in the list of wines available for tasting, but there are some unusual styles like Dry White Frontignac and a cabernet/pinot blend made in the dehydrated Amarone fashion. And according to my sister, all were “seriously delicious”! I had the pleasure of taking the 2016 Swinging Gate Pinot Noir for a test drive alongside an overdone lamb roast last weekend and it was undoubtedly the salvation of a charred young minted sheep. The pinot was typically light in the glass but herbaceous and smoky on the nose. Once on the palate. Layers of strawberry, clove and sweet tobacco unfold on the palate before cinnamon and spice characters develop through a long finale laced with fine tannins. Very approachable for a young wine!

I’m unlikely to get to the north of Tassie any time soon, but if you’re fortunate enough to be in the region, be sure to look up Swinging Gate and swing by for a tasting, or better still, savour a cheese platter and an afternoon in the vineyard or day spa! And if you notice an attractive, sporty, but mildly intoxicated lady taking a nap in the gardens, say “hi” to my sis for me!