Whether you think it’s marketing hoo-hah or just agronomist hocus-pocus, the rise of biodynamic and organic viticulture in winemaking has been as rapid as it is profound. Just scan the shelves of your local bottle shop and it will be difficult to miss the proud declarations of each club member winery to the biodynamic farming and vinification processes, not to mention the effusive praise of the retailer for becoming a disciple of the cult. But does a certification as “organic” or “biodynamic” really make any difference to the quality of the product in your glass?

By definition, an organic wine must be certified as having been made from grapes that were farmed using organic processes. Rather than use synthetic fertilisers, herbicides or pesticides, the primary producer will utilise biological controls and natural products. For example, rather than rely on poisons, weeds will be controlled by removing them mechanically, through competition or by animal grazing. The agricultural system is said to be scientific, but mechanistic. On the other hand, a “biodynamic” farmer will go one step further and in addition to shunning synthetics, take a holistic approach to their agronomy and use a closed system of production which seeks to balance nature and the moon cycles. The modern biodynamic practices are largely based on the work of Austrian philosopher, Rudolph Steiner, who thought that the ecosystem of the vineyard needed to be balanced in order to produce the best fruit.

But does a vineyard with a self-sufficient and interconnected living system really make for better wine in the bottle?

On a recent visit to Chile, I attended a presentation by an agronomist from one of the pioneers of the organic and biodynamic movement in that country, Emiliana Organic Vineyards. And never have I seen a vinophile so vociferously espouse the virtues of biodynamic farming practices. Such was his  fervour that I almost felt as though I was a captive member of the congregation at a Pentecostal service! According to the sermon of Emiliana agronomist, Fernando Pavon, the moon is the greatest energy influence on their vines, and accordingly, canopy management (leaf removal) is undertaken only during the 14 days of the ascending moon. He says that they also “Redbull compost to increase the microbiological activity” and that “energy is increased by undertaking a homeopathic preparation” of the soil. And it’s all because they “make a site, not a flavour”!

Perhaps the most striking example of Emiliana’s zealous disavowal of traditional methods is their use of “the Egg” – a concrete fermenter shaped as though it was laid. Fernando tells us that unlike the traditional stainless steel tanks, concrete is a non-conductive material that not only avoids damage to the naturally occurring wild yeasts, but that the shape allows perfectly for the flow of juice during fermentation such that stirring of the lees becomes unnecessary. Sound like naturopathic science or Salem-esque witchcraft? 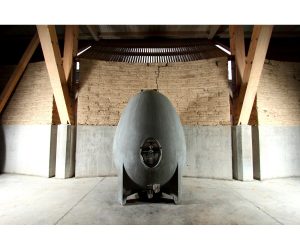 Whatever your view point, the results being achieved by Emiliana are indisputable. While their Colchagua Valley Coyam red blend is their headline act, the Emiliana white blend Signos de Origen “La Vinilla” is a testament to their holistic viticultural practices. The 2016 edition is a blend of Chardonnay, Viognier, Marsanne and Roussanne and shows floral jasmine and honeysuckle on the nose and delicate lychee and peach characters up front. Through the middle there’s a nutty creaminess that is cheered on by supportive pineapple, guava and tropical fruit nuances, with a viscous and oily texture through the finale. Who would have thought that such a medium to heavy palate weight could be achieved without the use of any oak! But that is, according to Fernando, exactly what “the Egg”, is capable of doing.

To some, biodynamics and organic winemaking is no more than a tarot card reading or palmistry for your cellar, but to the believers like the highly successful team at Emiliana, it’s all about energy and purity. Whether it’s the Chilean charge towards biodynamics, or just attention to detail, experience in the vineyard, or scientific learning, there is little doubt that the quality of oenological offering escaping from the west of South America is exponentially improving.

As for biodynamics and organics, I’ll sit on the fence for now, but with so many vignerons joining the French led foray into biodynamics, the momentum is as mystical as it is magnetic.