Zinfandel may not be a varietal that is widely grown in Australia, but in the United States it’s one of the most commonly grown grapes, accounting for over 10% of all Californian vineyard plantings. And as I discovered recently, it’s a style with a story!

Zinfandel grapes are black skinned and heat tolerant as consequently, they thrive in the Californian climate. The planting of Zinfandel in the State proliferated following the Californian gold rush of the mid-1800’s. Such has been the success of the grape that it became the most widely grown varietal in the region and by the end of the 19th Century, it was so well established that it was generally assumed to be a varietal native to the USA.

But by the 1960’s, at least one academic from the University of California, Davis (UCD) noticed similarities between Zinfandel and an Italian style, Primitivo. Although the Primitivo clone ripened earlier, there were distinct similarities, which raised the suspicion that in fact, Zinfandel may have originated in Italy. Studies in the early 1970’s showed that the two grapes had identical genetic markers, but there was a twist to come in the Zinfandel story. As DNA testing developed, it was proven that while Primitivo and Zinfandel are genetically the same grape, neither has any connection at all to the Old World regions like France, Italy or Spain. In a Mills and Boon type of zigzag to the plot, it was later established that in fact, the origin of Zinfandel and Primitivo was none other than Croatia – where a handful of old vines survived the European phylloxera epidemic of the late 19th Century. Who would have thought that the vines proudly claimed by the Americans and Italians as their own, would, in fact, have their origins on the Dalmatian Coast where it was locally known as Crljenak Kastelanski.?

While historically, Zinfandel has been vinified as a red table wine, in the 1970’s some Californian wine makers began to make a rosé style which had minimal skin contact and was produced with a sugary sweet finish. It proved to be a masterstroke as its popularity soared and the blush “White Zinfandel” soon outsold Red Zinfandel 6 to 1. Personally, I’ve never found a white Zin that I’m enamoured with, but the numbers suggest that it’s me who’s the odd one out!

During a recent trip to the United States, I felt compelled to properly research the Zinfandel story. And to ensure the investigation was credible, well-founded and included a full and proper analysis, there was no option but to undertake some serious sample scrutinisation… for the sole benefits of readers of this column, of course!

And after ignoring the Surgeon General’s bottle side warnings as to a limit for daily consumption, my conclusions are as follows: 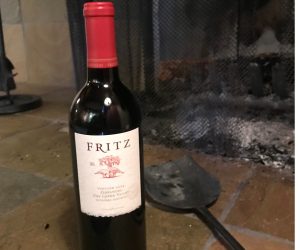 One of the more economical and crowd-pleasing Zinfandel’s I found was the Fritz 2014 Zinfandel. It’s made from fruit grown in Dry Creek Valley in Sonoma County. It’s deliciously bright and lively in the glass and doesn’t disappoint on the palate with heady characters of blackberry and smoky red fruits. There’s even a hint of strawberry on the edges. It’s a ripe and jammy style with a spicy lift on the back palate. There are better examples of the Zinfandel out there, though probably not at the sub $25 price point.

Zinfandel may not be a Californian native, but it has certainly made a comfortable home for itself in California and is a worthy companion at an Aussie BBQ or to most Mediterranean style dishes.